What you should know about credit spreads

A credit spread represents the additional risk (or risk premium) added on to a base interest rate (usually the rate of a government bond) when pricing corporate bonds.

Credit spreads are closely related to a company’s estimated likelihood of default. A riskier company’s bond would have a higher credit spread to compensate for the additional risk. As credit spreads tighten (contract), a corporate bond is seen to be more expensive due to it offering a lower yield.

The global low interest rate environment has led to a hunt for yield across asset classes, where in the bond space we have seen credit spreads contract across all rating bands.

As you can see in the chart below, after the GFC, spreads have been contracting almost without hiccup since 2012. In the investment grade (IG) rating spectrum, Aaa is seen as the safest bonds, followed by the A band, while the Baa band sits at the bottom of the investment grade ratings. From the chart below, you can see that investors are receiving approximately 1% less return per annum on a 5-year Baa US corporate bond (bottom IG band) now, than in 2016. In fact, investors in Baa-rated paper are now receiving the same return that investors in A rated paper (middle IG band) were receiving in 2016. (More information can be found on credit ratings in the breakout box below).

Whilst there has been a long period of spread contraction, you can see in the chart below that spreads right now are still not as tight as levels seen pre-GFC, where 5 year Baa spreads reached a low of 26 basis points vs ~101 basis points now.

Daintree Capital, being an absolute return manager, provides you the flexibility, via our Core Income Fund, to take advantage of spreads whether they continue to tighten or, indeed, widen. This allows us to provide you, as an investor, a stable return regardless of the direction of credit spreads. 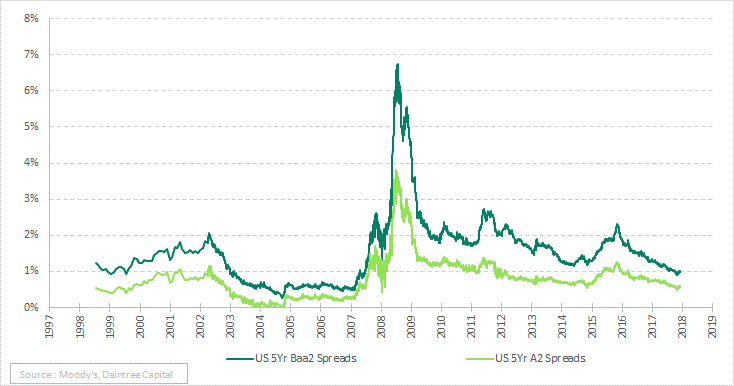 This is the view of the author, Simon Wang, Senior Credit Analyst.

[breakout] A credit rating is an opinion about credit risk that reflect the likelihood of a default (when a company cannot pay their promised interest obligations) and the expected financial loss suffered in the event of default. It gives lenders an easy way of seeing how likely they are to get repaid. The higher the rating, the lower your borrowing costs, this is because the company is seen as a smaller risk by the lender.

The main agencies who give out ratings are Moody’s, Standard and Poor’s (S&P) and Fitch.