Canary in the Coal Mine?

The legendary investor Warren Buffett once said that it is only when the tide goes out that it is revealed who has been swimming naked. We think this aphorism is particularly apt when considering the US Federal Reserve’s quantitative tightening (QT) programme. There has been a range of developments in recent weeks that suggest the first of the skinny-dippers are being exposed. In short, notwithstanding ongoing geopolitical concerns and trade uncertainties, we believe that the relatively modest reduction in the size of the Fed balance sheet is influencing markets as disparate as emerging market currencies and global bank equities.

The Fed commenced QT in October 2017 and has been gradually increasing monthly volumes (decreasing purchases) during 2018. If allowed to proceed as expected through 2021, the gross level of assets on the Fed balance sheet will fall from a peak of approximately US$4.5tn to just below US$3tn. While these are large numbers, actual QT completed through to the end of June has been just a fraction of this. 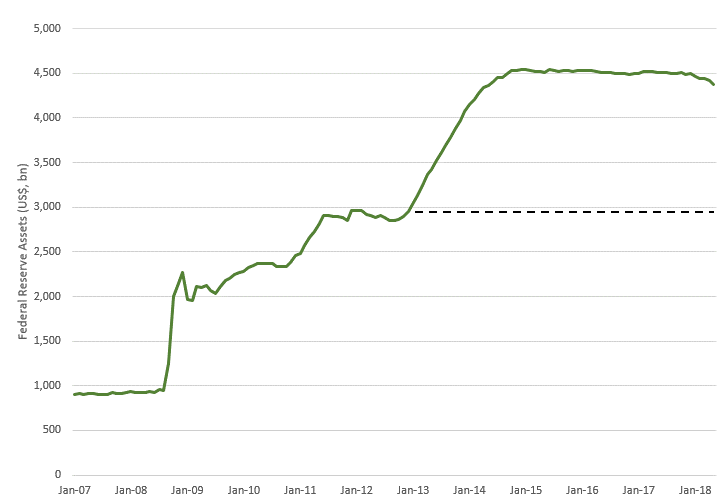 This process has been well telegraphed, and when compared to the total size of the US Treasury market is almost inconsequential. However, it is occurring at the same time as two other significant events – the increase in US fiscal deficits that require increased Treasury issuance, and changes to US tax law that make it cheaper and simpler and a requirement for US multinational companies to repatriate offshore earnings.

In recent weeks the US Dollar index has spiked higher, driven principally by forward expectations of QT, supported by a Federal Reserve which is showing a strong resolve to proceed with previously announced rates. As a result, the US dollar index has jumped to the highest level in two years and has coincided with increased volatility in various sectors of the financial system.

The effects have been stark. Argentina was forced to increase cash rates to a staggering 40%, clearly unsustainable in an economy that was already struggling to achieve meaningful growth. The Brazilian central bank was forced to intervene to support its currency twice in the space of three days, while at the same time having to deal with the effects of a crippling nationwide strike of transport workers. The Turkish central bank was forced to increase interest rates during an election campaign, risking political uncertainty to defend the lira. 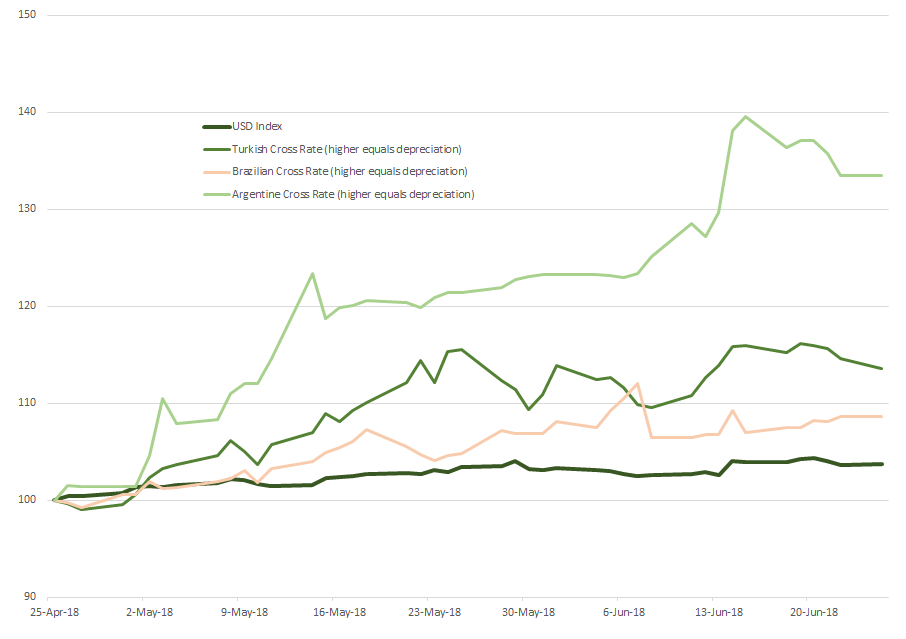 Meanwhile, equity prices of some of the globe’s largest banks have been underperforming, with the weakness intensifying as the US dollar index began rising. We do not think this is a coincidence. For banks with US operations, the shrinking Fed balance sheet means less excess reserves earning the (effectively risk free) Fed Funds rate, which now sits at 1.75%-2.00%. In addition, the increasing cost of USD funding will apply pressure to the liability side of their balance sheets. Therefore, with demand for credit subdued and competition among global banks robust, these institutions will face earnings headwinds in the latter part of 2018 and 2019. Recent market weakness looks to be recognition of this. 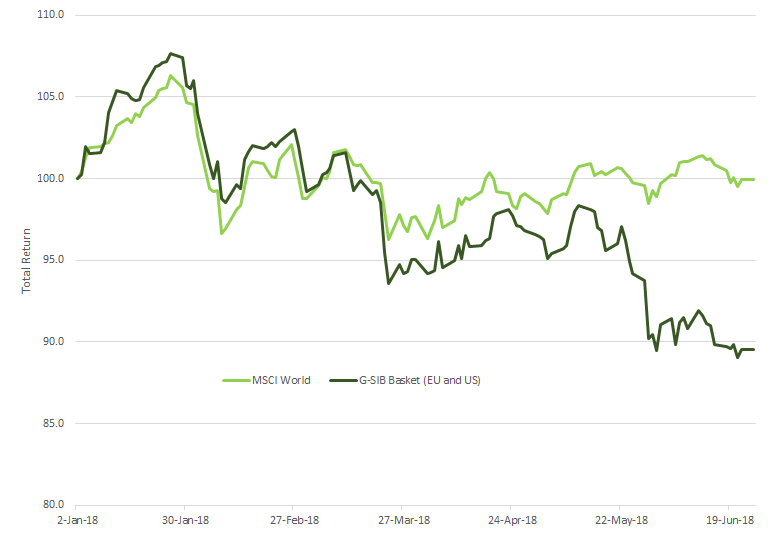 Implications for fixed income (and credit)

Fixed income and credit markets are arguably at the coalface of the QT thematic. With QE having had such a direct impact on these markets for so many years, it is not surprising that fixed income investors would be following the QT process most closely. While falling interest rates and low credit spreads have supported returns, it has come at the expense of the vital element of price discovery, especially in Europe. Part of the recovery process will involve the reintroduction of price discovery into the lexicon of fixed income and credit investors. The ability of the ECB to successfully withdraw QE over the next six months is integral to this. ECB QE has incorporated a larger corporate bond component than its US counterpart, and thus we see a higher chance of market dislocation in European credit as QE eventually becomes QT. At its most recent press conference, the ECB Governing Council did not shed any light on the timing of any QT, but given that interest rates were guided to remain at current levels “at least through the summer of 2019”, we feel the threat of European QT is still somewhere well into the future.

In Australia, credit spreads have proven more resilient than bonds issued in USD or EUR. With no globally significant banks and a relatively small corporate bond market, local investors have (until very recently) been more inclined to use pockets of volatility to selectively add to positions. However, if the QT process continues as expected it is unlikely that Australian bonds would remain immune to the broader normalisation process.

The Bank for International Settlements, in their Annual Financial Report on 24 June, noted:

“The current backdrop for monetary policy normalisation is unprecedented in a number of important respects. Historically, interest rates in advanced economies, real and nominal, have never stayed this low for this long and central bank balance sheets have never swelled as large in peacetime. The long spell of multi-pronged policy accommodation may have left lasting marks on the macro-financial landscape, making policy effects harder to assess.”

We could not have said it better ourselves, with the last sentence essentially the crux of this article. We believe that QT, policy normalisation, and associated implications will be important drivers of asset prices in the short-to-medium term. There are many ways that reduced USD liquidity could impact markets, and we have highlighted two instances that have developed over recent weeks. Ultimately, we see the path to policy normalisation as unpredictable in the years ahead, requiring a flexible but focussed investment approach.

Disclaimer: Please note that these are the views of the writer and not necessarily the views of Daintree. This article does not take into account your investment objectives, particular needs or financial situation.